Hoi An memories, which is a Vietnamese traditional ao dai performance program, aims to retell the story of Hoi An more than four centuries ago using modern staging techniques to create specific contexts, state-of-the-art lighting technology and sound effects. Memories of Hoi An – Vietnam’s biggest scene show with 2 records set.

The memory of Hoi An is a large-scale real-time show, an outdoor stage with a capacity of 3300 spectators. The stage setting combines mountains and rivers with a length of up to 1 km and more than 500 actors. The scene applies state-of-the-art sound and light technology, with the participation and organization of international experts, who have bags of experiences in the scene performance industry.

Five impressive performances at the program “Memory of Hoi An”

Act 1: Life – Memory of Hoi An in the early days of colonization

Life is a vivid picture of the daily activities of the people of Hoi An in the past. Specifically, the image of a girl sitting on the edge of a loom weaving with flexible hands and a gentle smile on her lips – This is also the character lasting throughout the 60 minutes of the show, which then creates an image to satisfy visitors at the last minute of the show. 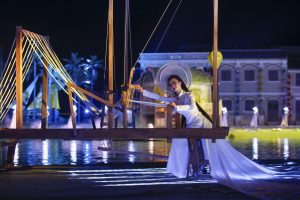 Life also has a vivid performance of the light path with 100 girls in slender dresses. The image of a new life begins simply in the bursting happiness of the young couple. And there are also pictures of hard-working men building houses and fishing, etc.

Act 2: Wedding – Memory of Hoi An in the Champa culture period 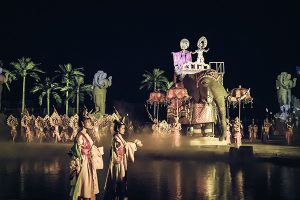 The performance of the wedding that left a deep impression in the audience is the majestic and interesting image of picking up the bride with elephants. Hundreds of actors play Cham soldiers in luxurious dresses, performing bustling dances to welcome the bride. Along with that, images of elephants with tall statues, romantic bridges, etc. All of them have clearly and charismatically recreated the wedding between princess Huyen Tran and the King of Champa, which was a milestone at that time. It is the memorable history thatmakes the audience can not take their eyes off the show.

Act 3: Boats and the Sea – Hoi An’s memory of the transformation period

The main message of the performance of the Boat and the Sea is the development of Hoi An to become a busy trading port of the 16th and 17th centuries with the highlight of the Faifo girl’s love story waiting for a merchant sailor who is often away from home. 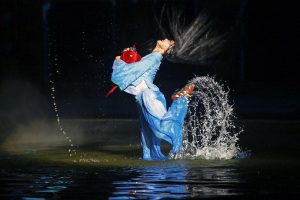 Returning to Hoi An in the 16th and 17th centuries in the context of developing a new economic sector, the young man was forced to sail at sea to trade goods with foreign countries. They are forced to be apart in nostalgia and an everlasting love to the end. Then she tranformed into a floral lantern light in the night after days of anticipation, prayer and longing

Act 4: Ben Bo – Memory of Hoi An about the period of multilateral cultural interference

It can be said that the Ben Bo performance is the main highlight of the reality show “Memory of Hoi An”. Ben Bo not only showed the audience the golden memories of Hoi An port but also really satisfied them with the careful preparation of every detail from character shaping, acting skills to the trick sound, light and a large number of actors. All is not discrete or lacking in logic, but instead is harmoniously combined in a natural wayto help the audience easily grasp the main message that the author wants to convey.

Act 5: Ao Dai – A combination of ancient “Hoi An memories” with modern breath 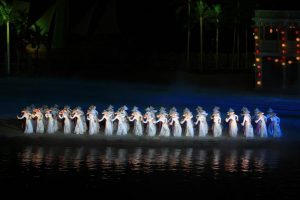 Hoi An is a rare city that preserves almost all of the ancient values ​​of hundreds of years ago despite many historical ups and downs. That makes Hoi An different and the people here have the right to be proud of their international friends about their priceless values.

The end of the scene show “Memory of Hoi An” is a traditional Ao Dai performance combined with ancient architectural works associated with Hoi An. In the space of modern sound and atmosphere, the girls ride bicycles along the path of light, weaving through each corner of the old town, which seems to bring the audience from modern life to an ancient Hoi An.

So what do you expect more for a great trip? Please contact us – Asia Master Tours for guidance, advice and get the most preferential price when you, your family and friends are going to enjoy Hoi An city. 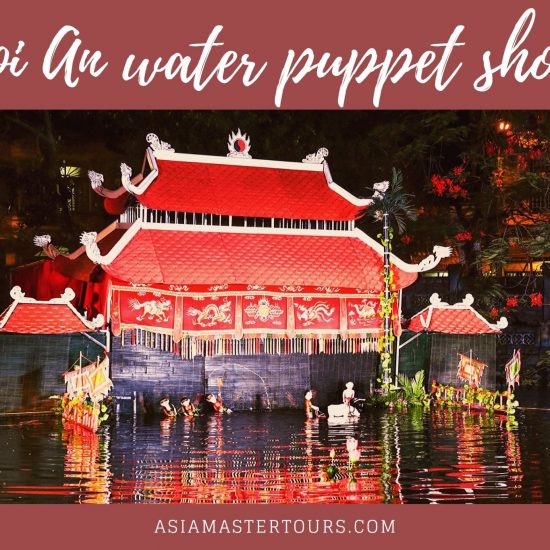 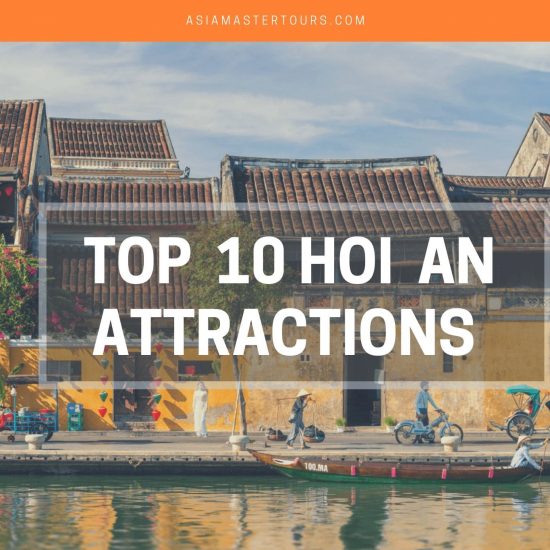