“The lady temple”, “the tiny temple”, “the pink temple”; Banteay Srei goes by many nicknames, an indication of the distinctiveness of this little gem of a temple, which feels so different to the imposing grandeur of the main Angkorian complex.

Considered by many to be the jewel in the crown of Angkorian art, Banteay Srei is cut from stone of a pinkish hue and includes some of the finest stone carving anywhere on Earth. Begun in AD 967, it is one of the smallest sites at Angkor, but what it lacks in size it makes up for in stature. The art gallery of Angkor, Banteay Srei, a Hindu temple dedicated to Shiva, is wonderfully well preserved and many of its carvings are three-dimensional.

Located away from the main monuments is the Banteay Srei temple, one of Angkor’s highlights. This temple contains the finest, most intricate carvings to be found in Angkor.

Located in a remote area the temple was rediscovered in 1914 and cleared some 10 years later. It was reconstructed using the method of anastylosis by French conservator Henri Marchal during the 1930’s. Today the Banteay Srei is a very well preserved monument. Its exquisite ornamentations that cover most of the temple show great skill and precision.

History of the temple
The temple was build in 967 by Yajnavaraha, a Brahmin priest and counselor of King Rajendravarman II and his brother. Before the foundation stele was discovered in 1936 it was assumed that the temple was from a much later date (almost 1300) because of the refinement of its ornamentations. The stele praises King Jayavarman V, who was King when the Banteay Srei was build and Yajnavaraha and his brothers, the builders of the temple.

The pink sandstone structure is small compared to other Angkor monuments. This is probably because the Banteay Srei was not build by a King, and it would be considered disrespectful to build a monument larger and grander than a Royal sponsored temple. To prevent further deterioration of this magnificent and much visited temple, the inner sanctuary has been closed to visitors.

The outer enclosures
The Banteay Srei comprises of 4 enclosures containing a moat and several structures. Within the fourth enclosure (the most outer one) is a processional walkway leading to the main Eastern entrance. The walkway was lined by galleries on either side, of which most of the sandstone pillars are still standing. Both pediments and lintels on the galleries contain very finely carved ornamentations. Among them are a depiction of Viradha who abducts Sita, a scene from the Indian epic Ramayana. Others show Indra riding the three headed elephant Airavata, Varuna, the God of the oceans, Vishnu, Shiva, Uma and Nandi, the sacred bull.

The third enclosure consists of a wall, about 100 meters long that enclosed a moat, which is now dry. Across the moat is a causeway leading to the Eastern and Western entrance gopuras, that are guarded by lions.

Within the second enclosure are two library buildings opening to the West, one on each side of the East entrance. The pediments of both libraries contain carvings of mythological stories.

The inner sanctuary
The inner sanctuary contains three prasats set on a platform almost one meter high. A mandapa chamber precedes the central tower. The Banteay Srei is the first temple where a mandapa chamber was added to the sanctuary. The central tower measures almost 10 meters high, the others are slightly shorter. All three towers are decorated with dvarapala and devata images and contains small sanctuary chambers.

The lintels on the towers contain several depictions like the abduction of Sita by Ravana and a fight between Vali and Sugrava from the monkey Kingdom, a storey from the epic Ramayana. The foundation stele dated 968 mentions that the most import linga named Sri Tribhuvanamahesvara was enshrined in the central tower. The other two towers were dedicated to Shiva and Vishnu. 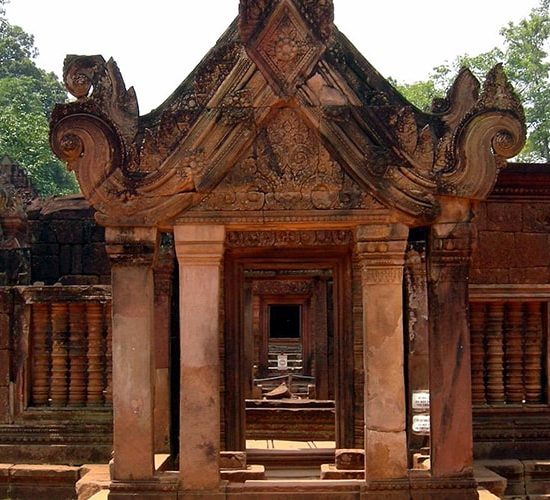 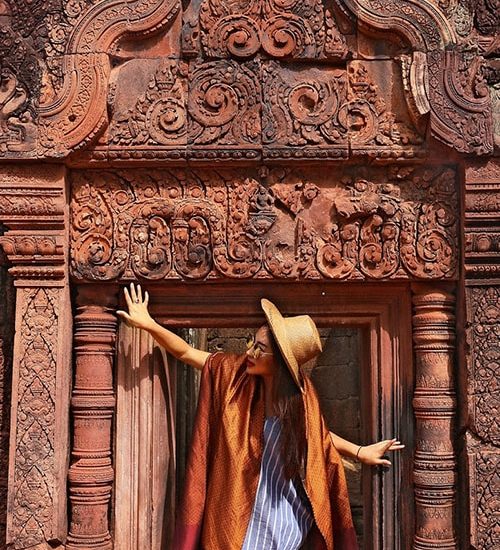 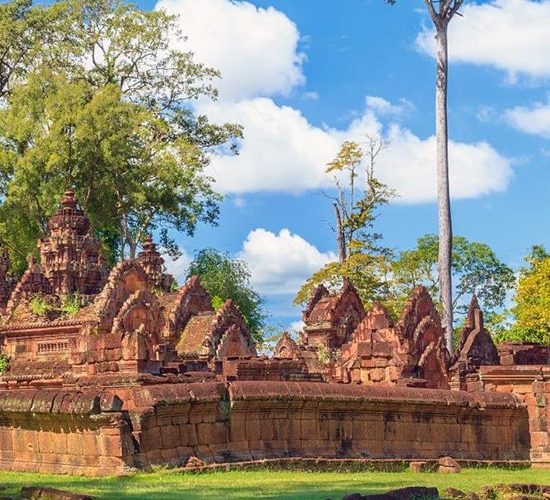 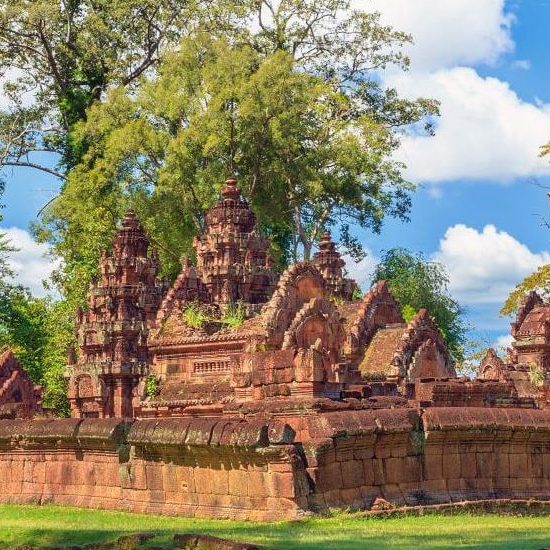