Bagan is located on the banks of the Ayeyarwady River (Irrawaddy), a few miles south of Mandalay and north of Yangon. During the heyday of Bagan, this was the center of the Pagan Kingdom, now Myanmar. More than 10,000 Buddhist strutures have been built here. Today, however, only 2,000 remain, these Buddhist buildings are the main reason for attracting visitors to Myanmar.

Bagan has a tropical climate, only rainy season and dry season. The months you should avoid going to Bagan are from March to May – very hot months, and from June to October – when there is heavy rainfall. So, the best time to get to Bagan is from November to February next year. However, this is also the peak time for tourism in Myanmar, so you have to book everything from air tickets or train tickets to hotel accommodations to sightseeing tours.

Ancient Bagan was once known in history as the Pagan, the capital of the Pagan Kingdom. The history of the Pagan dynasty began around 849 when King Pyinbya (ruler of 846 – 878) chose to build, shaping the capital of the Pagan dynasty just formed and named Pagan. For the next 200 years, the kingdom of Pagan grew stronger and took over the surrounding areas. Peak point was in 1057, King Anawrahta (r. 1044 – 1077) conquered the kingdom of Ramannadesa (also known as Thaton kingdom) of the Mon in Lower Myanmar, unifying the land that forms the present-day Myanmar. 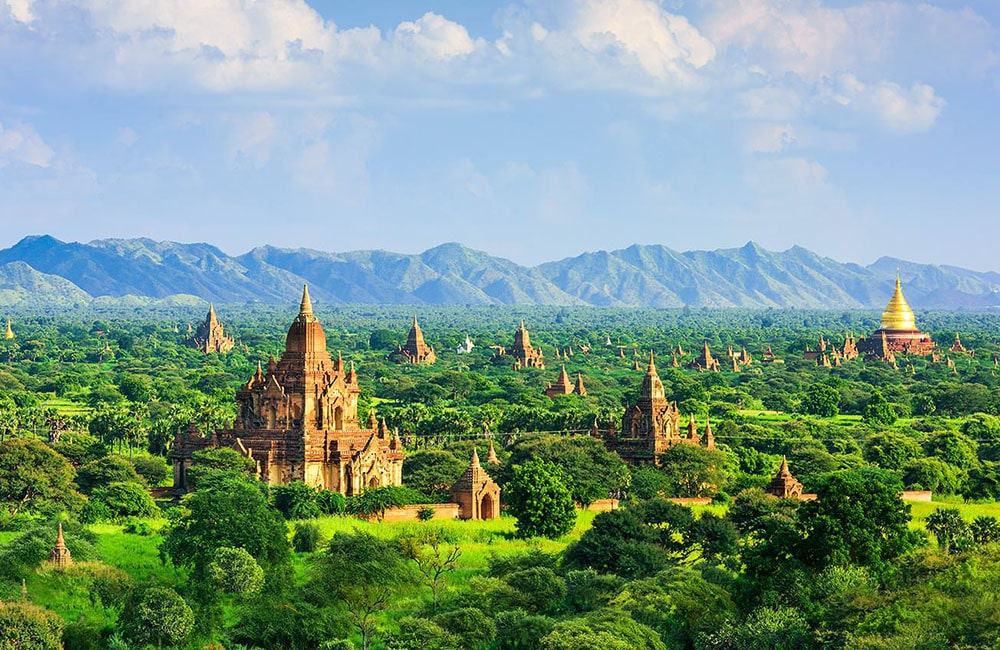 Most people in Bagan follow Buddhism. They are very warm and friendly, but have a little hesitation. Do not wear too revealing if you do not want to draw attention. In places of worship, your legs and shoulders should be covered, and you must remove both shoes and socks before entering. Couples should also pay attention not to express too much publicity in public. You should also avoid political and religious topics when talking with people here.

Arriving in Bagan is a “leisure” which is you don’t have to think about what to do, because the obvious answer is “visit the temple”. Then, you will be slightly overwhelmed when opening the map of Bagan and see numerous temples, with strange names such as Shwe San Daw, Lawkahteikpan. , Manuha, Nanpaya, Schwezigon, Bulethi, … and do not know how to explore this “temple” city, and what temples should be visited. 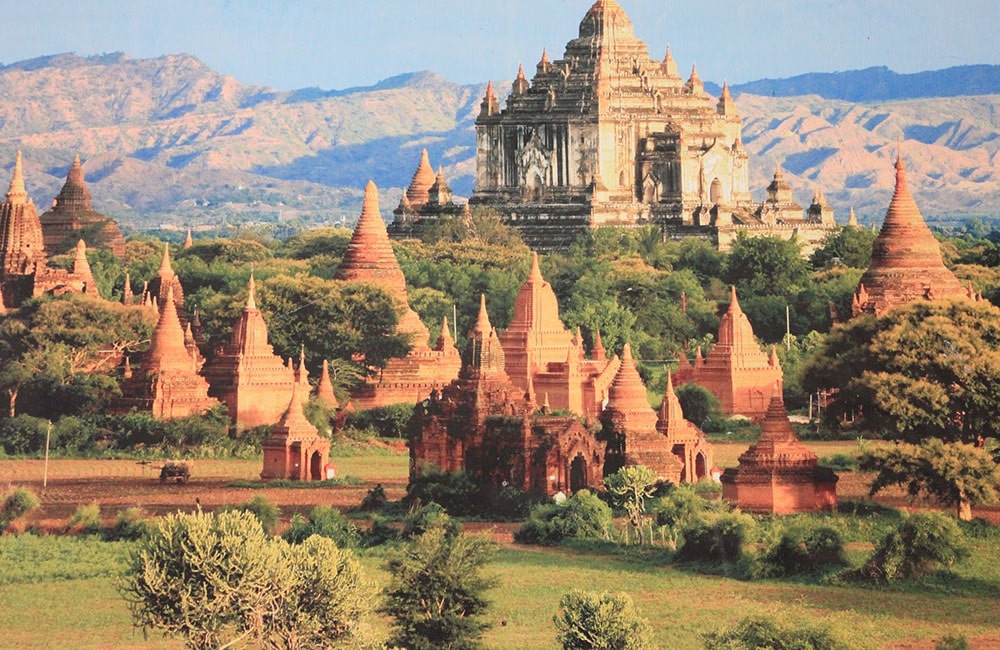 Among the pagodas, there are many small temples with simple architecture and some very large, scale and sophisticated temples. Although the number of large towers is less than the number of small ones, but it’s also a long list that must take a few days to go. Therefore, as most tourists, you should only select a few temples that you find more interesting to visit. There are Shwezigon, Ananda temple, Dhammayangyi temple, and Thatbyinnyu (the highest temple / temple).There are quite famous temples like Shwe San Daw, Lawkahteikpan, Manuha, Nanpaya but I do not visit.

3.2 Admire the sunrise and sunset on the temple towers

Getting to Bagan without seeing the sunrise and flying balloons from the towers is very regretting. This is one of the two experiences you will like the most in Myanmar.

There are some beautiful temples to see in the sunrise and the hot air balloon. On the advice of others travelers, you should see the sunrise at Bule Temple. Road to the Temple of Bule is a dirt road with a lot of sand, so slightly slippery. Be careful not to run too fast to avoid falling.
You should set off early if you want to watch the sunrise. One more reason to go early is that there are plenty of tourists watching the sunset so you should come early to get a nice place. If it’s too late, there’s not even room. Many tourists soon leave after the sun rises. But my advice is that you should not leave too early. The balloon flies higher and the sun is clear and the scene is even better. 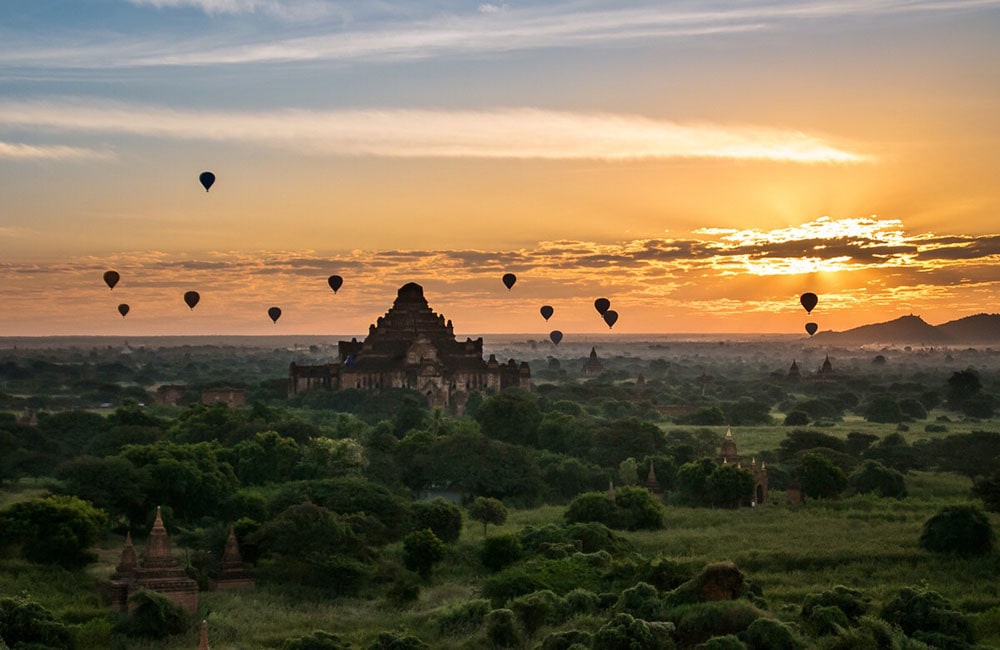 Just like dawn, the sunset is also a beautiful moment of the day to watch. It is also very beautiful but according to travelers, the sunset is not as impressive as the dawn, because there is no dark smoke, no hot air balloon, and no atmosphere of silence and serenity of the moment of new day. Anyway, after a day of walking from one temple to another, almost every tourist wants to do something different to change the atmosphere. Therefore, temples that are convenient to watch the sunset are very, very crowded, even more crowded than the dawn (probably because not everyone gets up early) so you have to go a little early to have a seat. 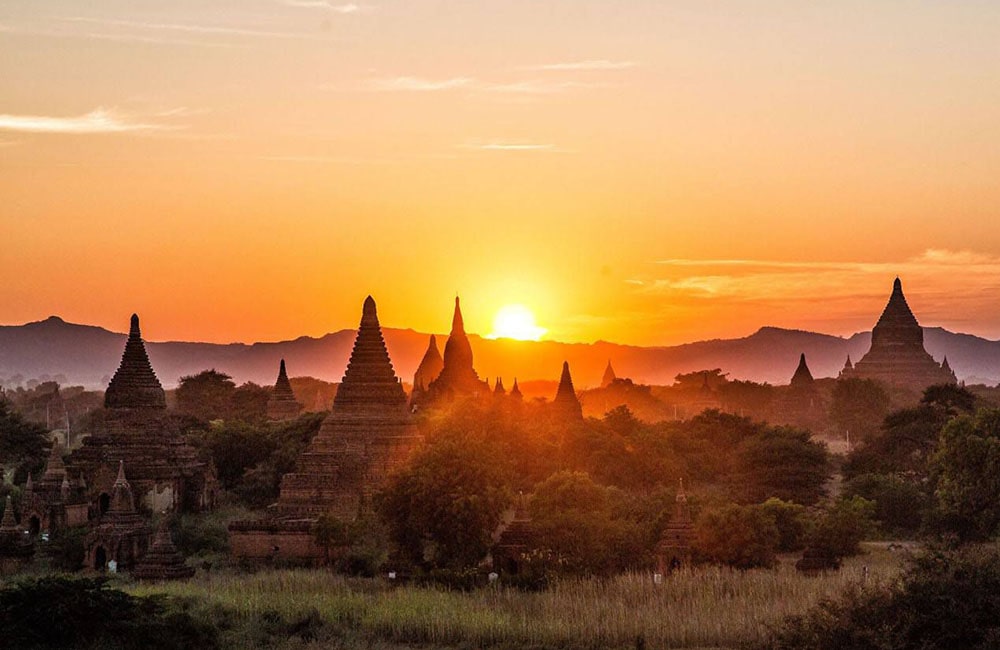 3.3 Joining in a cruise to watch the sunset on the Irrawaddy river

This is the rest of the two experiences tourists like most in Myanmar but unfortunately it seems that this activity is quite unknown. From the first day to Bagan you will notice that along the way there were signs “SHOW BOAT SERVICE”. And it is a boat trip on the Irrawaddy River.

The Irrawaddy River was once the source of the ten-thousand-year-old capital of Bagan. Now, although not as important as before, Irrawaddy may still retain its natural beauty. SHOW boat service is a boat rental service on the Irrawaddy River.

There are many options with different schedules and prices. Boat ride on the sparkling water of the sun, the two sides are temples, the scene is very beautiful. Boat for 1 hour from 5h15 to 6h15, price is 12,000 kyat (range $ 10), can go 4 people. If you travel less than 4 people, you can invite tourists there to share the boat to reduce costs. Boat is beautiful and fully equipped, has a rattan chair, water table, even there is junk food on the boat always. 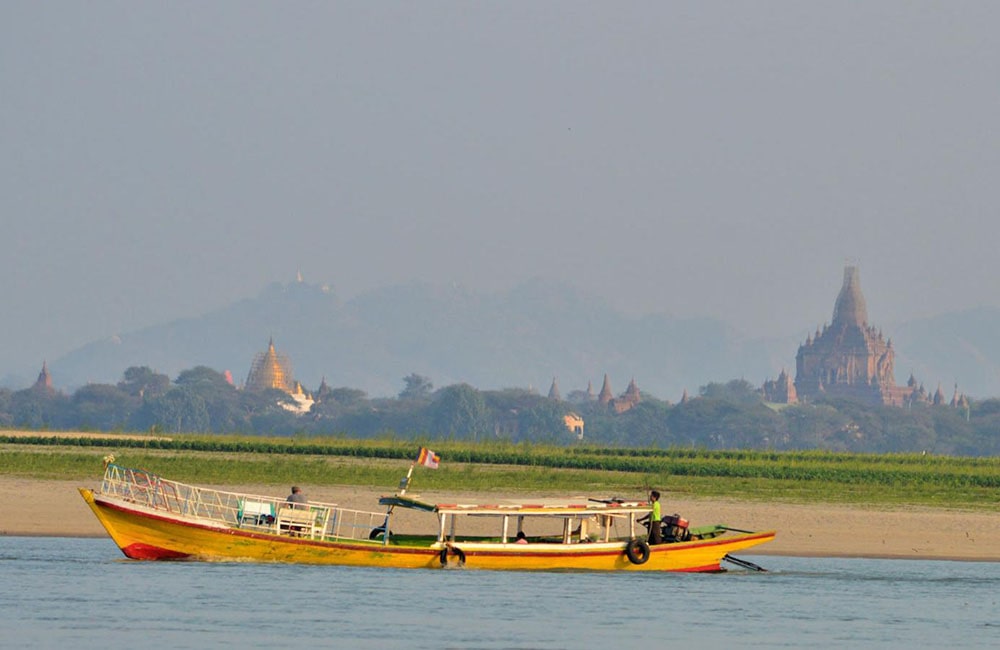 Also, a bit far from the town is Mount Popa which is also a popular spot in this place, about 65km from Bagan. This is a very spiritual place for locals (supposedly the nats’ shelter – spiritual souls) so mostly local people visit. The best way to go there is to hire a taxi – if you go a few people (for example, go alone or two people), along the way there are many shops hanging a taxi to Mount Popa, you can go there to register. Because the taxi departs at fixed hours (as you remember, 7am).

There is no direct flight to Bagan. You should fly to Mandalay or Yangon first. From there you will have many options to go forward.

Flight: If you want to save time, the plane is the means to take you to Bagan fastest. Many domestic airlines from Mandalay, Heho and Yangon offer direct flights to Nyaung U Airport (the nearest airport to Bagan). The flight is about 30-40 minutes from Heho, and an hour and 20 minutes from Yangon. Ticket price is about MMK80k (equivalent to over 13 million VND).

Bus ride: Day or night bus trips are the most popular option because the bus system in Bagan is very good and inexpensive. Bagan routes depart from Yangon, Mandalay, Nyaung Shwe, Taunggyi, Kalaw and Pyin Oo Lwin. The car will stop at a stopover for several hours, and provide a wet towel and complimentary bottled water for guests.

Train: Going by train, you will have chance to see beautiful countryside of Myanmar through the window. However, the train system in Myanmar is not very developed and often comes late as expected. There are three types of compartments, the normal compartment of a wooden chair, the first compartment of a couch, and the compartment of a bed. However, whether you choose to sit in any compartment, must also prepare for a long and rocky ride in front. 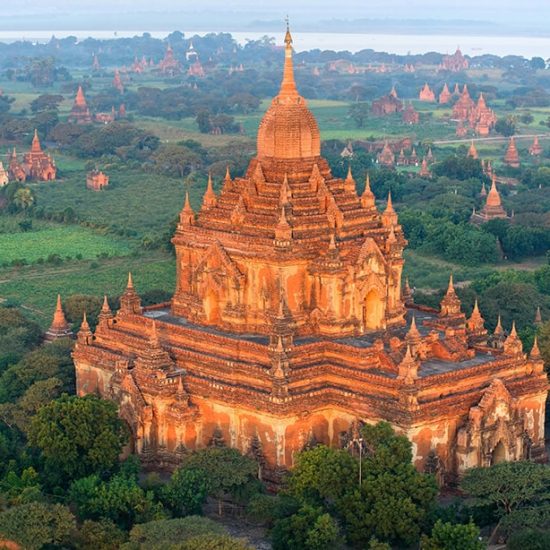 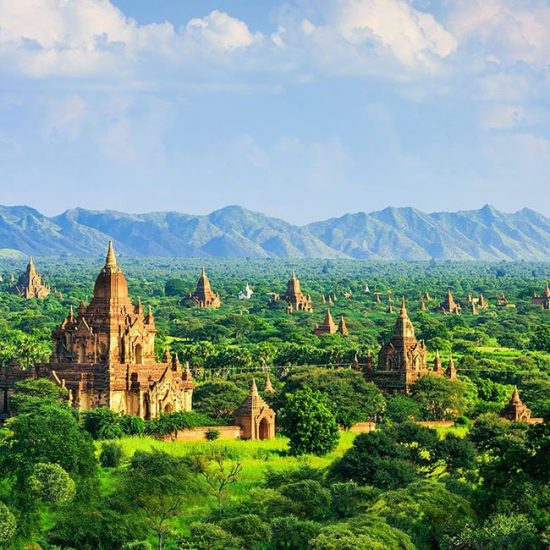 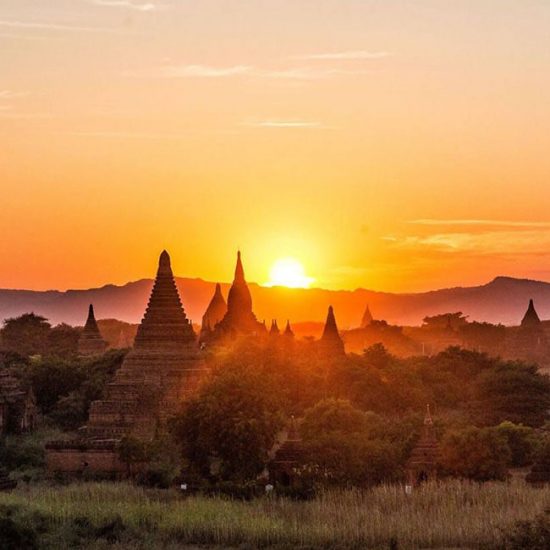 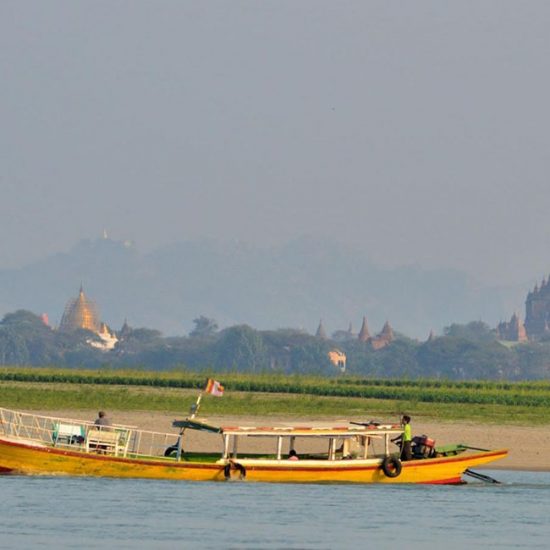 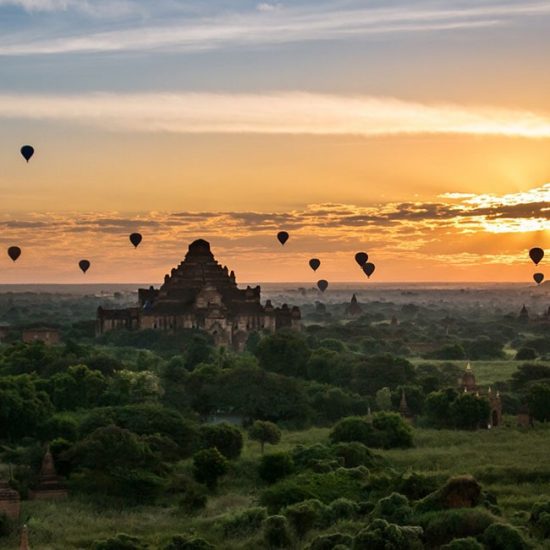 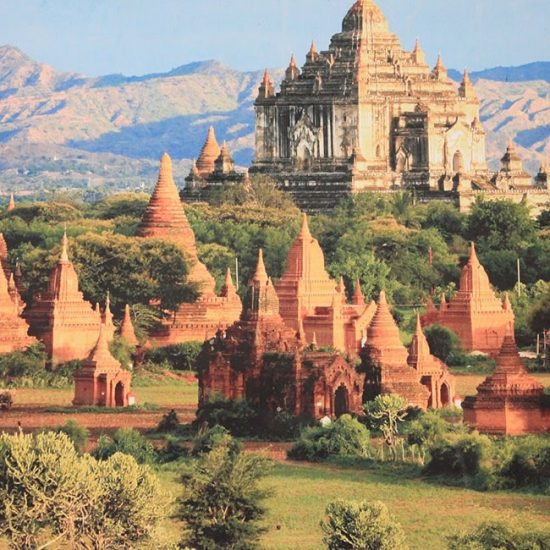