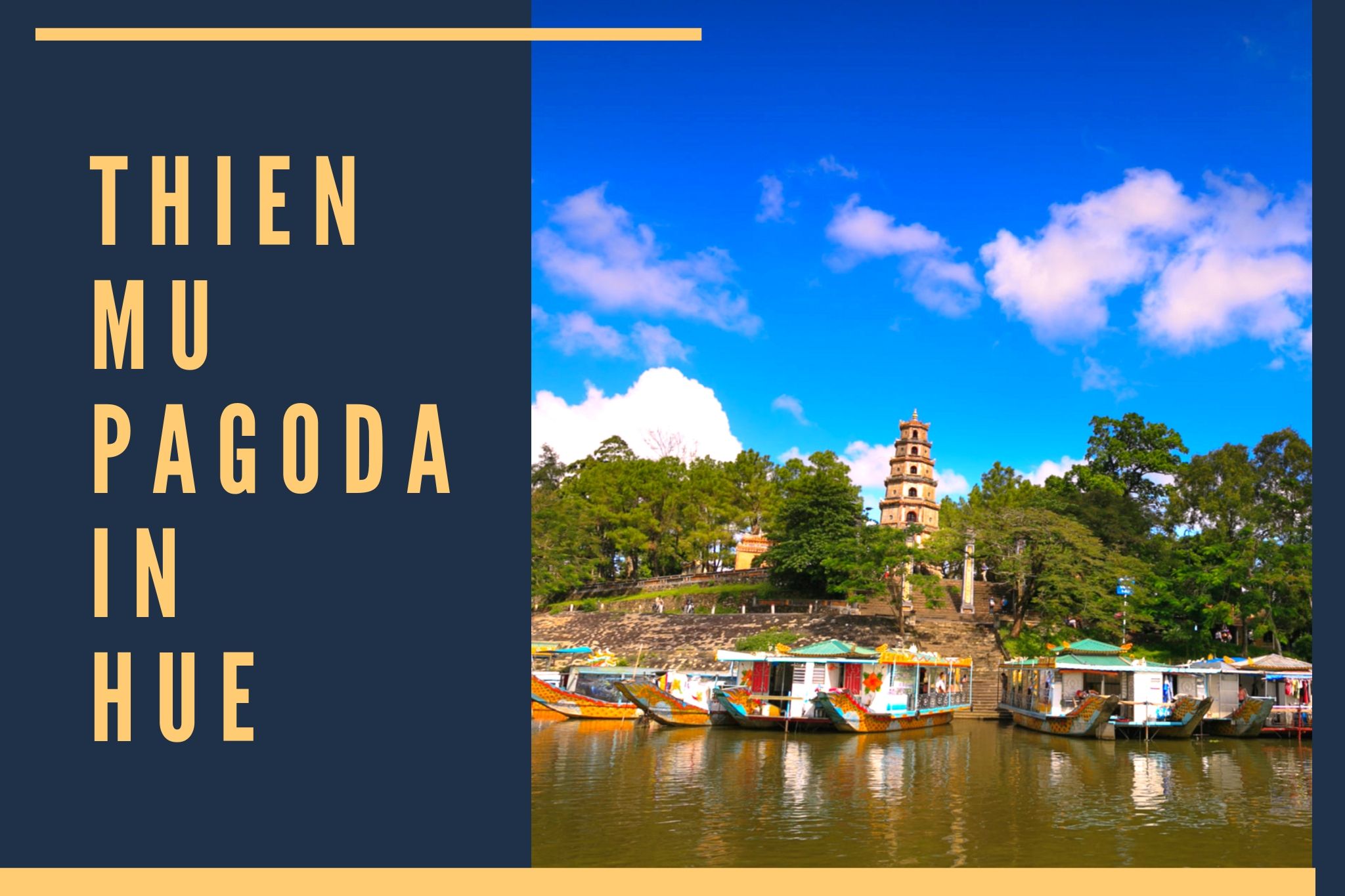 Thien Mu Pagoda – The oldest and most sacred temple in Hue

Nestled in a place that is not noisy and bustling, Thien Mu Pagoda Hue still attracts cross-tourists when coming to Hue because of the stories and mysterious dialogue, by the beauty of solemn and peaceful beauty by the poetic Perfume river. 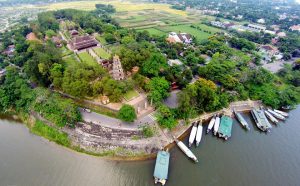 Before the time of setting up the pagoda, there was a pagoda also named Thien Do (Thien Mau) on the hill of Ha Khe.

According to legend, when Lord Nguyen Hoang came to be the Governor of Thuan Hoa, he personally went to examine the terrain here in order to prepare a scheme to expand the land and build Giang Son. In a horse hike along the banks of the Perfume River looking upstream, he encountered a small hill rising on the banks of the meandering blue water, the earth was like a dragon turning back to look back – this hill had His name is Ha Khe. 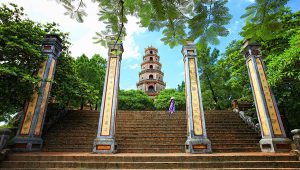 Local people said that there was often an old lady in red pants with green pants appearing on the hill at night telling people: “Then there will be a lord to come to the temple to gather spiritual energy, to make a lasting circuit, for the mighty South country ”. So this place is also known as the sacred name Thien Mu Son.

The thought of Lord Nguyen Hoang seems to have caught up with the wishes of the people, Nguyen Hoang is happy, in 1601 Lord Nguyen built a temple on the hill, overlooking the Perfume River and named it “Thien Mu”.

Under the Nguyen Lords, Thien Mu Hue Pagoda underwent many major renovations. Among them, the highlight is the expansion of the scale under Lord Nguyen Phuc Chu (1691-1725). In addition, the Lord (another name of Lord Nguyen Phuc Chu) also cast Dai Hong Minh – a large bell, weighing over two tons in 1710, engraved with an intelligent card on the bell. By 1714, the Lord continued to renovate a series of architectural works of scale such as Thien Vuong palace, Dai Hung palace, the sermon, the Tang Kinh … God also personally wrote the article, carved into stone steles. Great talk about the construction of buildings in the temple. In particular, Lord Nguyen Phuc Chu also sent people to China to buy more than 1,000 Buddhist scriptures and put them at the Tang Kinh floor, praising the Buddhist philosophy and stating the legend of Venerable Thach Liem – a person with great merit in help Lord Nguyen revive Buddhism in Dang Trong. 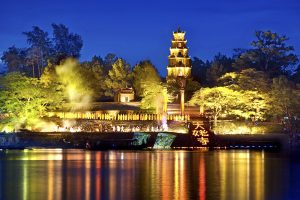 With a great investment, Thien Mu became the most beautiful temple in Dang at that time and was one of the extremely famous Hue tourist destinations. In 1788, the Tây So’n Dynasty chose the pagoda to be the place where Te Dan was located. Under the reign of Thieu Tri, around 1844, Thien Mu Pagoda was built an octagon tower named Tu Nhan, later renamed Phuoc Duyen. The tower was built in front of the pagoda with a height of 21m, including 7 floors and each floor has a worship of Buddha statues, the top floor has a golden Buddha statue. This is the architecture associated with Thien Mu pagoda.

In addition, King Thieu Tri also built Huong Nguyen temple in front of the tower. On the roof of the temple, there is a Falun – the wheel of Dharma – a symbol of Buddhism. But in 1904, the communal house was collapsed by a big storm ceiling. By 1907, King Thanh Thai rebuilt the pagoda but the scale was not as large as before. Currently, Thien Mu Pagoda holds two Vietnamese records, the largest pagoda in the Le Trung Hung period and the tallest octagonal pagoda in the temple. In addition, the pagoda is also classified as a list of 20 landscapes of Neurological land and is an indispensable destination in Hue 1-day tours.

As the main house in the temple, the architecture is identical to that of scallops. The temple was restored in 1959, the rafters are built of concrete outside is a layer of fake wood paint. In the temple, the statue of Buddha Maitreya laughed generously. In the sky on the sky, there are 4 words “Linh Thuy Cao Phong” by Lord Nguyen Phuc Chu in 1714. 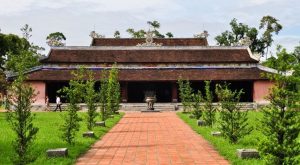 Located behind Dai Hung Palace, a large yard of ornamental trees, fruits, inside the temple. The place of worship Quan Cong (since 1907). According to legend, after his death, Quan Cong became aware of the future of yin and yang, so although the temple is a place of worshiping Buddha, in Quan Cong temple, people often worship a whole set of tattoo cards and monks at the temple always do guess work for those who come to tattoo. 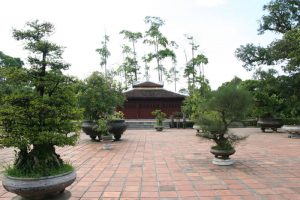 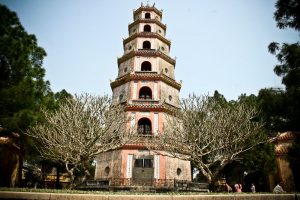 Those who come to Hue visit this spiritual place with the psychology of praying for good luck for relatives and friends around. Thien Mu Pagoda is a building that serves the spiritual life of Hue people, and is also a great contributor to the beauty of Hue – the unique beauty unique to the nerve land, the highlight. statues in the cross tourists travel to Hue.

You can explore more information about Hue such as Hue Vietnam resorts and Hue Vietnam weather or see our exciting Sapa tour from Hanoi such as Sapa Motorbike Tour, Tour Sapa Fansipan and Sapa Trekking Tour. 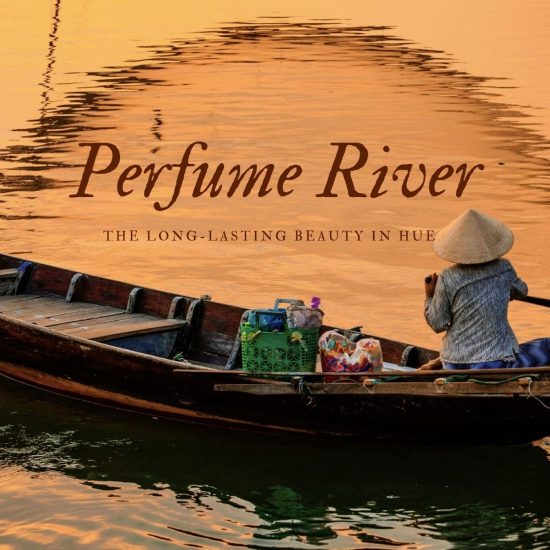 Top things to do in Hue city